The West Hollywood Design District is filled with some of the most talented people and soaring creative energy, along with some of the city’s best restaurants. We’ve narrowed down five of our favorite stops for food along with unique dishes from traditional Mediterranean and Italian fare, to surprisingly delicious twists on burgers, fries, and even goat cheese. 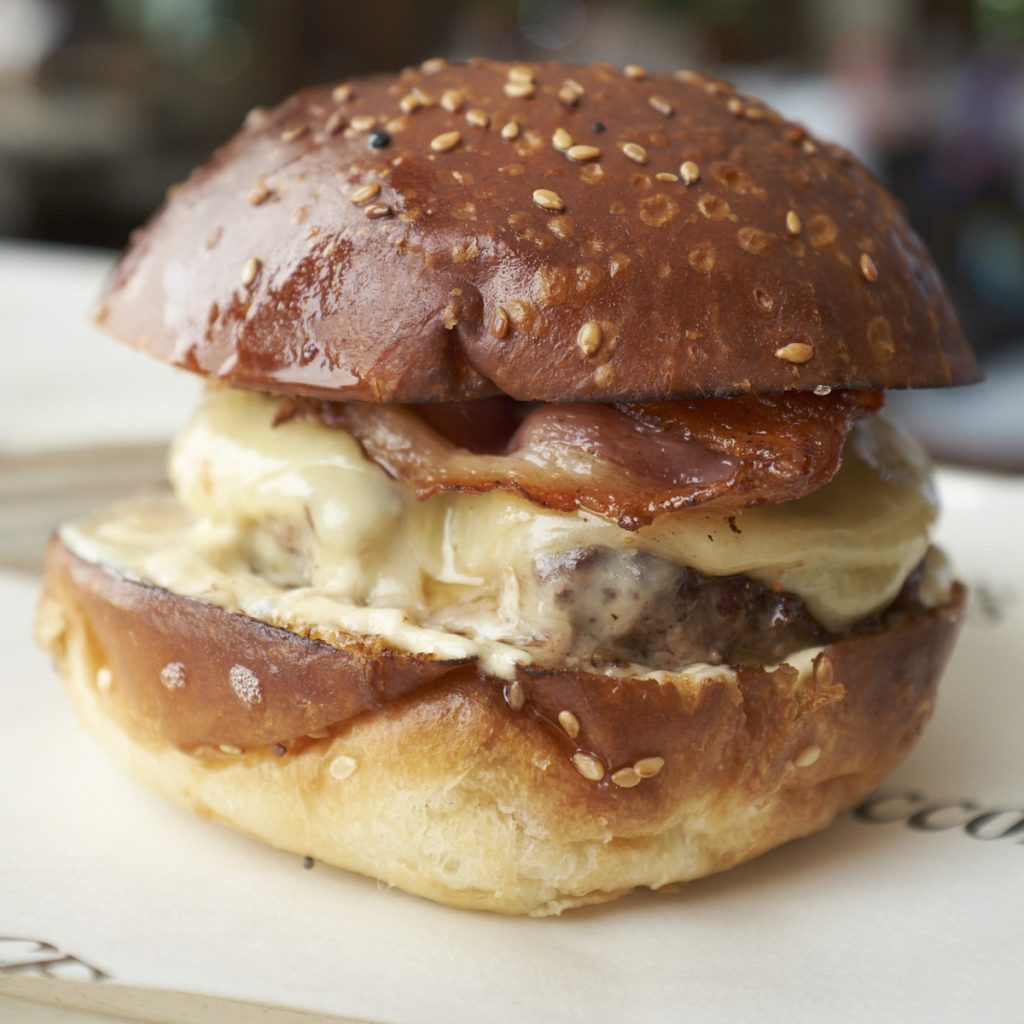 Cecconi’s is located on hallowed party grounds on the corner of Robertson and Melrose in the district. That very spot used to be the site of the star-studded Vanity Fair Oscar parties when it was Mortons, and prior to that, the quintessential 1980s watering hole, Trumps. Over the past decade, Cecconi’s has carved out its own reputation as an Italian dining staple from the pizza patio lunches to glasses of Prosecco at the bar followed by pasta for dinner. What you might not know is they also offer a killer truffle burger from 3pm-6pm and late-night after 10pm Tuesday through Saturday. Cooked on a flat top next to the prime beef patty, the brioche bun has a crispy texture to match the slight crunch of the Italian Porchetta, while oozing with Italian cow’s milk fontina cheese, and truffle aioli making this the perfect gourmet comfort food bite.

This intimate open-air patio is not only one of the oldest establishments in the district but one of the best kept secrets in town.  Hidden behind leafy foliage on Robertson, you might just see Rod Stewart or Mick Jagger slipping in and out for a carefree long lunch. Perhaps this is because the European vibe is palpable and friendly co-owner Eddie Kerkhofs, seems to know everybody by their name.

The renowned pesto sauce served with burrata and sheet pasta is made fresh, twice a day from an original Genovese recipe that is worthy of the acclaim but the classic dish here is the wild, line-caught whole Italian branzino fish imported fresh from the Mediterranean Sea that can serve up to 3 people. Some longstanding patrons might argue that the white wine pan sautéed Dover sole is the ‘must-order-dish,’ or the lobster with white truffles. To keep the peace, why not take a group of friends, order them all and then you can make your own assessment? 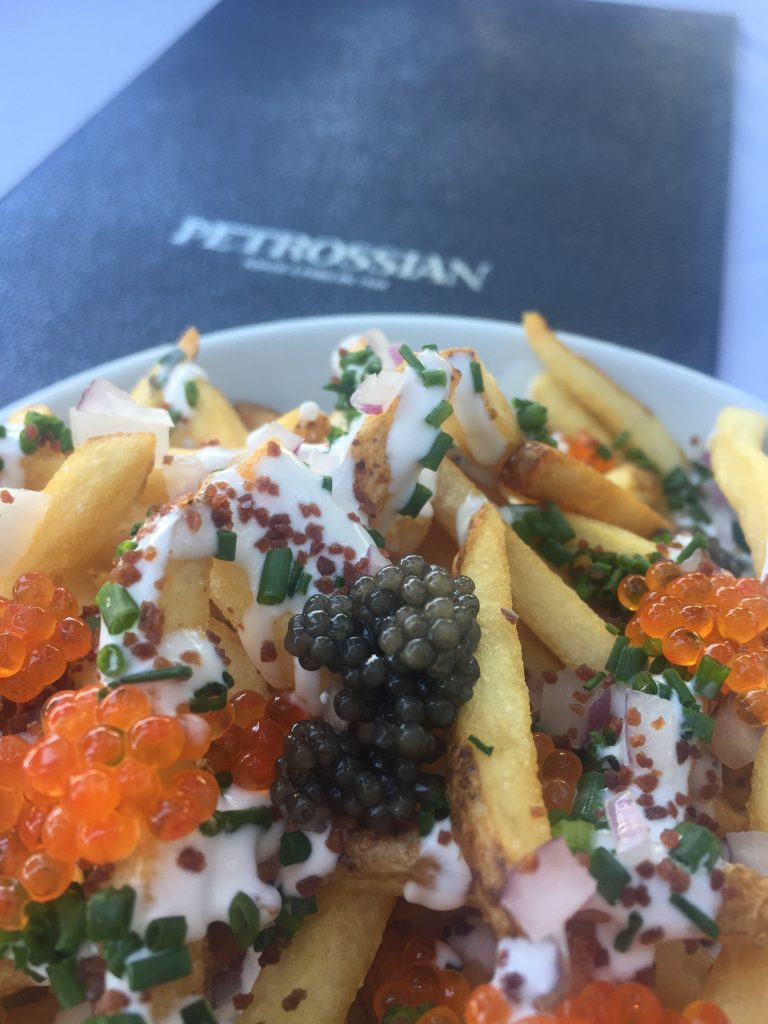 Caviar Frites and Martini at Petrossian

One of the finest caviar houses in the world with outposts in Europe, New York, and Las Vegas, happens to also be located right in the heart of the Design District. A takeaway counter near the entrance reveals shiny blue and white tins holding various grams of Tsar Imperial or Ossetra President tiny black eggs. In the fancier all-white table cloth restaurant side of the space, one of the most decadent dishes in town is the caviar frites.

Chef Carlos Carbrera’s contemporary spin on the dish includes thin, crispy frites topped with three types of caviar including an orange-hued trout roe, laced with crème fraîche, and sprinkled with delicate green scallions. This ingenious version of a fish-n-chips favorite actually brings this high-end product down to a casual indulgence. To complete the experience, order a house Beluga martini garnished with a transmontanus caviar cube. We’ll take that instead of an onion or olive any day.

Owner and Executive Chef Casey Lane of the Tasting Kitchen in Venice opened his sleek Italian-French-Moroccan restaurant inside the Kimpton La Peer Hotel in West Hollywood a few years ago which quickly became a top table to book. The chef’s Pasta Alla Piastra, aka 100-layer lasagna with Bolognese, has already become a stand-out dish on the menu. Lane describes how he constructs the intricate dish, “We make a traditional Bolognese, then bag it and sous vide it for several hours before layering it  into blanched pasta sheets. We bake off about 100 layers then slice it into pieces to cook on the piastra until we get the caramelization on the corners. So, every bite has the crispy corner texture of a lasagna pan dish.”

New for summer Sundays through the end of August, chef Lane decided to mix up the now-iconic dish with a Lasagna Verde. The verdant version is made with minted lasagna pasta sheets, lamb ragu, English peas, Taleggio cheese fondue, béchamel, and rosemary. 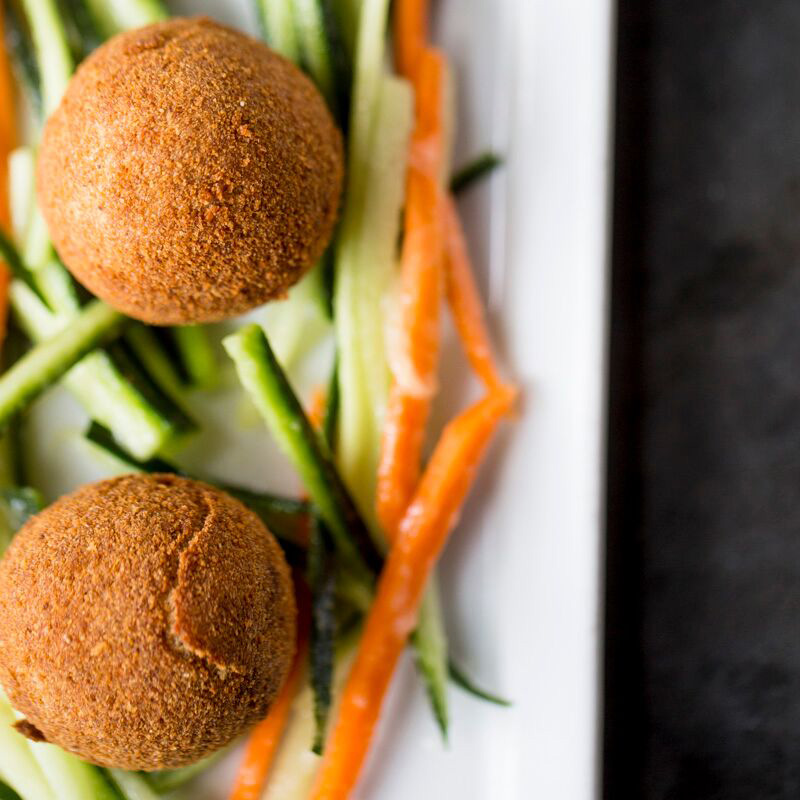 If you’ve ever seen an episode of the Bravo hit series Vanderpump Rules, then you know these balls of fried fromage are a big hit in the neighborhood – and not just with the customers, but also the cast and crew. The star of the show is none other than the co-owner Lisa Vanderpump, along with her partner and husband Ken Todd, who also own Tom Tom and Pump Restaurant. Each week good times mixed with mayhem ensues but you can usually count on someone inhaling an order or two before or after a busy shift. Along with a glass of pinot grigio or Vanderpump’s house rosé, the crispy breadcrumb coated texture, with a kick of cayenne pepper, is served with a cucumber, carrot salad and tangy mango sauce is a perfect combination and you might just be served by a famous face in the process.

Soulmate WeHo has a Wine for Every Taste

dineL.A. Restaurant Week in the District